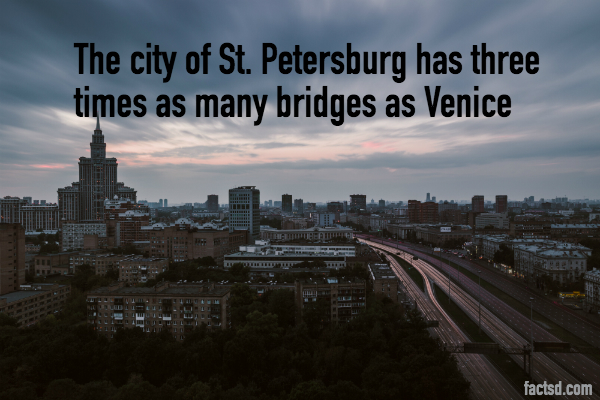 Russia facts: 46 Interesting facts about Russia. Russia is the largest country in the world and is 1.8 times the size of the US. Not as powerful as the erstwhile Soviet Union, it still considered a major power with a say in the day to day affairs of the world. It is also a permanent member of the UNO. The nation inspires awe and even fears because of its gargantuan size and often bigger than life achievements. Let’s explore more facts about Russia.

Russia is a nation which is located in Eurasia and is the largest country in the word.

It occupies one-sixth of the Earth’s land mass and is bigger than the size of Pluto.

The official language of Russia is Russian, but there are 27 other languages which are spoken across the vast expanse of the nation.

The Trans-Siberian Railway is the worlds single longest railway and passes through eight time zones in its 5700 miles.

The Red Square is not a symbol of Communism, but its genesis is from the word “Krasnyi,” which once meant “beautiful.”

Russian language does not have a word for ‘the’ or ‘a’ and uses Cyrillic alphabet instead of Latin. Russian is one among the five most spoken languages in the world.

The Russian capital Moscow boasts more billionaires than any other city in this world.

Lake Karachay, a lake in the southern Ural Mountains in central Russia was the dumping ground for radioactive wastes and is said to be the most polluted place in the world. A person standing near its vicinity could be killed in an hour.

Russia is the ninth largest country in the world, and the gender ratio in Russia is currently 86.8 men per 100 women.