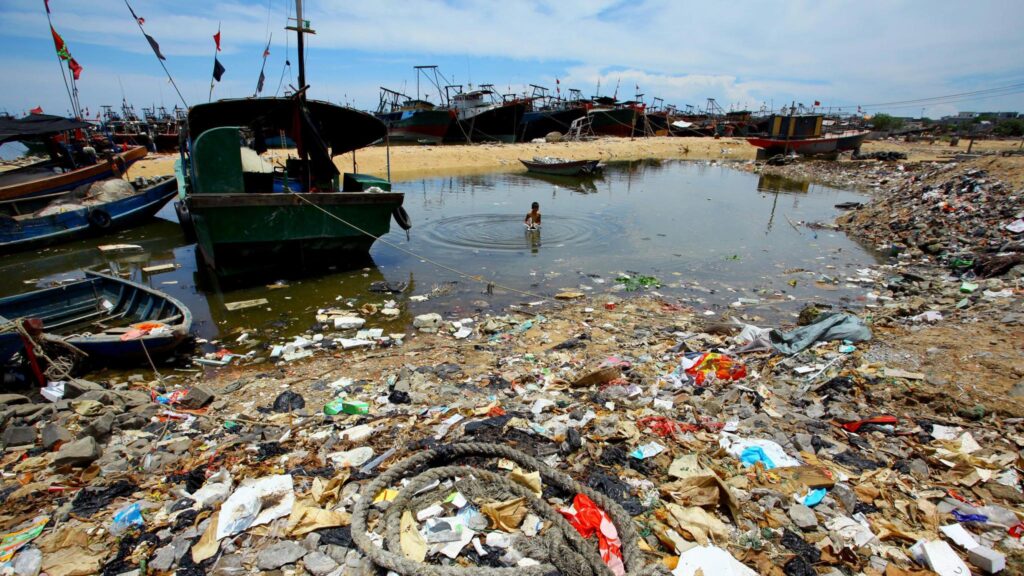 Water pollution is one of the greatest threats to the human population, and it’s only getting worse. It seems like there is a major news story surrounding water pollution every few years, but nothing seems to come of it.

Ahead are 20 surprising water pollution facts that are tough to ignore. The problem isn’t something that generations in the future will have to deal with. It isn’t isolated to poor countries that we’ll never visit. This is something that affects everyone who lives on this planet.

Take a look at these facts and see if it changes the way you look at pollution. There are some small changes you can make to your own life, and use your influence as a consumer to support companies who handle pollution the right way.

Quick Navigation
20 Water Pollution Facts You Didn’t Know
What Can Be Done?
A Path Forward

Around 40% of the American lakes are so polluted that they no longer support aquatic life. Even more than that, they’re so unsafe that you can’t go swimming in them. The same lakes that previous generations used for swimming in fishing are no so hazardous that they display signs to warn people away. Despite all of the glaring facts on this list, aquatic pollution is hardly slowing down across the globe. Governments and corporations dump around 2 million tons of sewage and other waste into the water every single day.

We hear a lot about people dying from all sorts of causes. Violence is one of the leading causes of death, whether it’s wars, murders, or other sources. Ahead of violence on the global death meter, though, sits those who die from ingesting unsafe water. Deaths caused by hazardous water supplies are closer to diseases like HIV and malaria.

Of course, animal life is on the front lines of this environmental crisis. Humans are dying at an alarming rate, but seabirds and sea mammals are dying as well. Over 1 million seabirds die from pollution, and 100,000 sea mammals die as well. We hear a lot about the dumping in the world’s oceans, but there doesn’t seem to be much coverage on the effect it is having. Plastic is one of the most deadly pollutants for ocean life since it can invade natural habitats and linger for centuries. Now, there are over 40,000 tons of plastics floating on the ocean surfaces. This isn’t even considering what sits below the surface.

Animals don’t know any better, and they eat what they find in the ocean. A lot of the time, they end up eating something made out of plastic. In fact, half of the sea turtles, 44% of seabirds, 22% of crustaceans, and more fish than we can count have already eaten some form of plastic in their lifetime. With the repeated dumping, it would be a surprise if that number didn’t grow even more. The Milky Way is a massive place. We’re only a speck of dust in our galaxy - or more aptly a piece of plastic. When you consider how vast our galaxy is, this next statistic is even more striking.

There are more pieces of microplastics in the world’s oceans than there are stars in the Milky Way galaxy. Most of those plastics float as well and are sitting at the top of the ocean waiting for a bird or fish to eat them.

The Earth is now full of “Dead Zones,” which are oceanic sites that are so polluted they can’t harbor life. They’re almost islands of trash created by human pollution. There are around 500 in total now, which is hard to imagine without a reference. To bring it more to a land scale, these dead zones are equal to the size of the entire United Kingdom.

The oceans are still a massive mystery to us. We can’t even access most of what’s in the extremely deep waters, but we know a lot about what we can see down there. The reality is striking.

Plastic is the most common element found in the world’s oceans. We’re destroying biodiversity with our pollution, and creating a place that’s almost uninhabitable for the creatures that were here before us. The obsession with pharmaceuticals and personal care products are contributing to the world’s water pollution as well. These drugs wash away into water supplies across the country and the world. They destroy the ecosystems in these areas and create hormonal imbalances in the life that calls these animals home. This dumping can even affect the way humans develop in the long-term.

China is the most populated country on the planet and suffers from a host of water-related issues. Around 40% of Chinese water bodies are tainted with pollution. The pollution is so widespread that approximately 700 million citizens drink contaminated water in China. Oil is one of the most devastating pollutants to our planet’s oceans, and no shortage of it gets spilled along the way. In fact, oil is far more harmful and dangerous to marine wildlife than trash is.

One ton of oil is spilled into the water for every million tons companies ship around the world. That adds up to 1.3 million gallons of oil that these companies spill into the ocean every year.

The meltdown at the Fukushima nuclear plant in Japan following the 2011 tsunami was the most catastrophic nuclear meltdown since Chernobyl. Engineers couldn’t even reach the site to turn off the reactor because of the nuclear contamination.

By the end of the disaster, the Japanese government had dumped 2 million gallons of radioactive water into the Pacific ocean.

Children are particularly susceptible to dying because of unsafe drinking water. 3.2 million children under five years old die every year in developing nations from poor sanitation and drinking unsafe water.

Much of the Bangladesh water supply is contaminated with arsenic, a hazardous chemical. Tens of millions of citizens have already been exposed to arsenic through the groundwater.

You might think your local beach is safe, but that might not be the case. Around 10% of American beaches are so polluted that they don’t meet the federal standard for safe swimming. Freshwater species are at a far greater risk of extinction than terrestrial species. Experts estimate that their risk could be nearly five times greater, but we often don’t hear about these species going extinct. A shocking 18% of the world’s population defecate in the open. That’s around 1.2 billion people whose waste gets washed into the local water supply. This is a risk to the health of the population as well as other species who live in nearby lakes and rivers.

What Can Be Done?

These water pollution facts are downright terrifying and paint a bleak picture of the future of our planet’s water supply. Freshwater is already becoming scarce in certain parts of the country and the world. States like California and Texas have experienced recent waves of water scarcity, and the problems will only rise as the freshwater systems become more polluted.

On a personal level, there are some small changes you can make. Be mindful of how much trash you generate - knowing that a lot of that trash will end up in the ocean. Limit the amount of plastic you use in your daily life, especially since recycling is becoming harder to do.

Unfortunately, personal lifestyle improvements might not be enough to reverse the damage we’ve already done to our planet’s water systems. It will take changes on a global and industrial scale to start allowing the saltwater and freshwater ecosystems to rebound.

Use your dollar and your vote as your voice. Support regulations that protect the oceans and lakes on Earth. Don’t buy products from companies that you know disregard the environment in the name of higher profits.

If we band together as a human population, we stand a chance of preventing whatever catastrophe is in front of us. We can only abuse the environment for so long until something dramatic needs to take place. In the end, that could mean an event that decimates or possibly eliminates the human species.