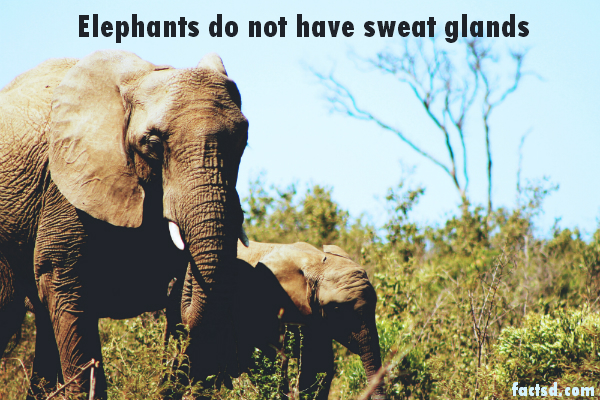 Elephant facts: Interesting facts about elephants. Elephants are the largest land animals and the most spectacular and beloved creatures on Earth. They are enormous, intelligent, sociable and strong and have captures human eyes for centuries simply because of their size. Elephants are characterized by its long tusks, highly dexterous trunk and massive ears. There are two species of elephants, the African elephants and the Asian elephants, but recently a new elephant species have been recognized, the third being the African forest elephant. Elephants are found in the tropical regions of Africa and Asia. While African elephant is the largest mammal on earth, Asian elephants are slightly smaller than their cousin. Elephants are listed as threatened animals and are mercilessly hunted for their ivory tusks. Poaching, habitat loss, and human encroachment are the most common threat to elephant population. Here are few interesting facts about Elephants.

Elephants don’t have a layer of fat under their skin to protect them from cold. They get stomach cramps if the temperature drops below 2 degrees.

Elephants produce a lot of methane as a by-product of digestion. They amount of methane they emit in one lay would be enough to power a car for 32 km.

Elephants skull have air pockets to make it lighter, otherwise their heads would be too heavy to lift.

An elephant only digests nearly 40% of what it eats, and therefore needs tremendous amount of food to sustain its massive body.

Elephants rarely get cancer because they have 40 copies of genes that code for tumor suppressor protein p53, while humans only have two.

Elephants use mud as a sunscreen to protect their skin from UV light. Regular mud baths protects them from burning, insect bites and moisture loss.

Elephants are one of the few non-human animals, who can suffer from post-traumatic stress disorder.

Most elephants in the zoo or in the circus are females because they are easier to control.

Elephants have sensitive skin, so sensitive that they can even feel a fly landing on it.