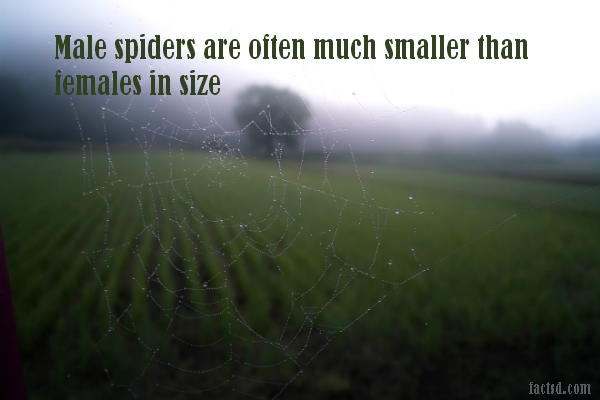 Spider facts: Interesting facts about Spiders. Spiders are arachnids and not insects; the arachnid family includes scorpions, ticks, mites and harvestmen. The name spider itself can evoke responses of fear or awe in people, but regardless of which side you fall there is a quite a bit you don’t know about these amazing creatures. Spiders aren’t one of the scary animals; in fact they do much more good than harm. They are not harmful to humans. Spiders can range in size from tiny to nearly the size of a small dog. Though they don’t have a very good reputation in the society, but they are integral to a healthy ecosystem. Spiders keep a check on harmful insects, recycle dead animals and plants, and pollinate plants. Let’s explore interesting spider facts.

Spiders don’t get caught in their own web because of their self-oiling legs.

Only female spiders are dangerous than males as they are too small and weak to bite through the skin.

One can overcome fear of spiders by cuddling them at the London Zoo. The Friendly Spider Program session is designed to help those whose fear spiders.

When you kill a spider, you make the spider population in your house smarter and sneakier by taking a stupid spider out of the gene pool.

Spiders silk is liquid as it comes out from spider, but it hardens as soon as it gets in contact with air.

Spider looks a lot bigger if you fear them. Studies proved that people have no trouble in estimating the size of birds, butterflies, or even wasps, but spiders consistently appear much larger to arachnophobias than they do to those who don’t fear them.

Giant tarantulas keep tiny frogs as pets. Insects will eat the burrowing tarantulas eggs, so the spiders protect the frogs from predators, and in return the frogs eat the insects.

Spiders can only take in liquid food. The venom allows them to change their prey into liquid.